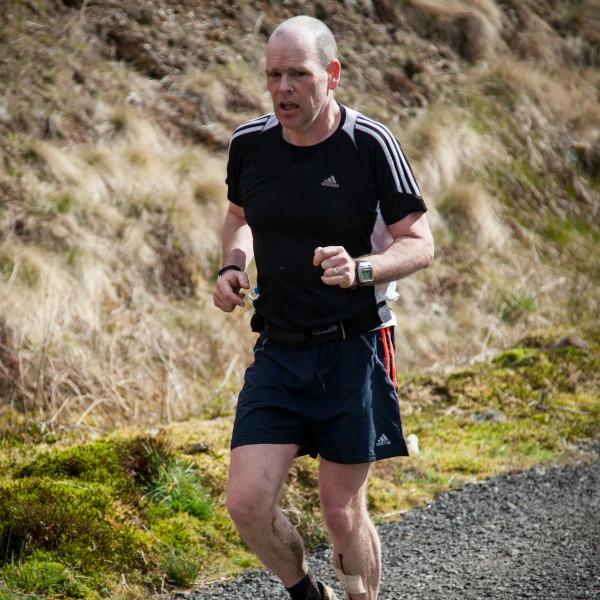 Bio
Known as Minty, I’ll be 54 on race-day, and accurately described as “solid” in appearance by a well-known Aussie WHW runner. I’ve latterly down-graded after many years in cut-throat management, and now I do the accounts for a company selling large AD plants to farms, turning cattle slurry into gas and electricity. Think of the value of this stuff as you trudge through Cow Poo Alley! I live in rural Warwickshire; husband to Julia – who runs faster than me and who heads up my support team (actually she’s the only one in it ATM, hint hint), with three lovely grown-up daughters (who all ran a mile when I suggested crewing for me), and a couple of mischievous yet adorable grandsons. Amateur musician playing lots of instruments just as badly as I run.
Ultra History
I’ve completed 25 ultras since 2010, beginning with the first ever D33.  Built up strength and stamina via Flings and Cateran 55s up to my first WHWR in 2013. Had a ball until a trip and banged my head 8 miles from the end – I reckon I may be the only runner to have had have a little snooze on the Lairig Mor cobbles during the race! Anyway, with help from other runners, Lundavra marshal Neal Gibson and my ace support team, I finally made it to the finish in 27 hours, a few stitches and an overnight stay in the hospital and out just in time for prize-giving! I managed one further goblet in 2015 (31 hrs) but chronic leg injuries were already having a negative effect, and frankly, since then I thought my WHWR days were well behind me.
Why the WHW?
I’m really happy and content when I run on the WHW – it’s where I love to be. You can’t beat a long day on the trails in the Highlands! Plus I have so many cherished friends attached to the trail and this race. Last year I was struggling even to complete parkruns, but hearing some MV60s (you know who I mean) bang on about their (truly) brilliant race times made me confront the (wide) mirror and decide do something about this slide to uselessness. So I entered the 2019 ballot and got lucky… yikes! From then on, I’ve been working extra hard to shed a lot of excess weight, use a sports physio and get out there and put the miles in – on the trails as much as I can. Time on legs is what it’s about – the speed-work may come later!
Aim for the race?
From such a modest starting position my goal will be to finish before prize-giving (ie. 35 hours) – and hopefully not the lanterne rouge for final finisher, but que sera, sera…