Advance warning. This is long

Hiya folks. Sorry it’s taken so long but I am only just starting to come round from the weekends excitement. 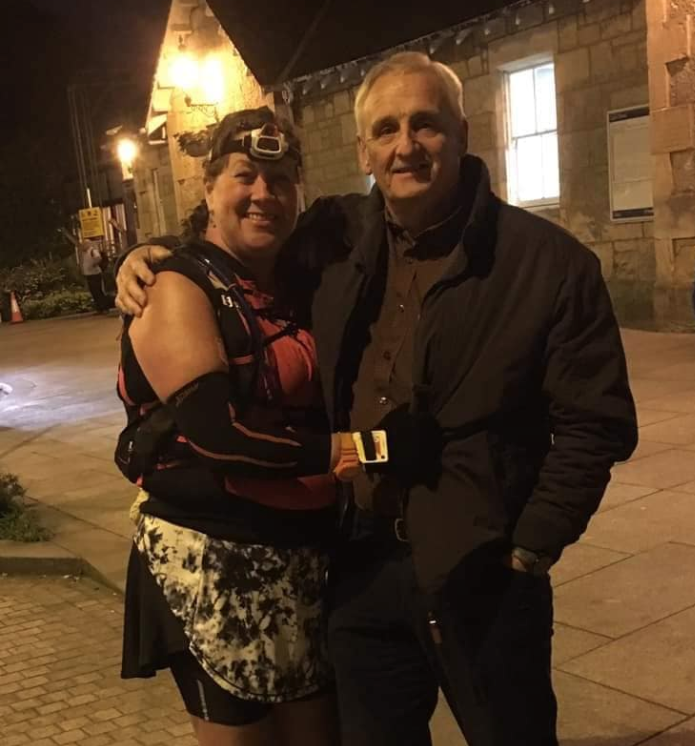 Even by my standards, this was crazy. I started on Friday night in Milngavie. Got registered but was having loads of doubts and nerves had kicked in. Still, 1am came and 238 of us set off.

By Drymen (12 miles in), I was feeling pretty rough. It was maybe the nerves but I started to feel sick. I persevered through and by Balmaha things had started to improve. It was the most perfect weather. Dry but not too hot and Loch Lomond looked amazing on my way down Conic Hill. I know the midgies were an issue but more so for my support crew. I was fine as long as I kept moving. I loved the section to Rowardennan and was happy to see Kirsty when I got there. 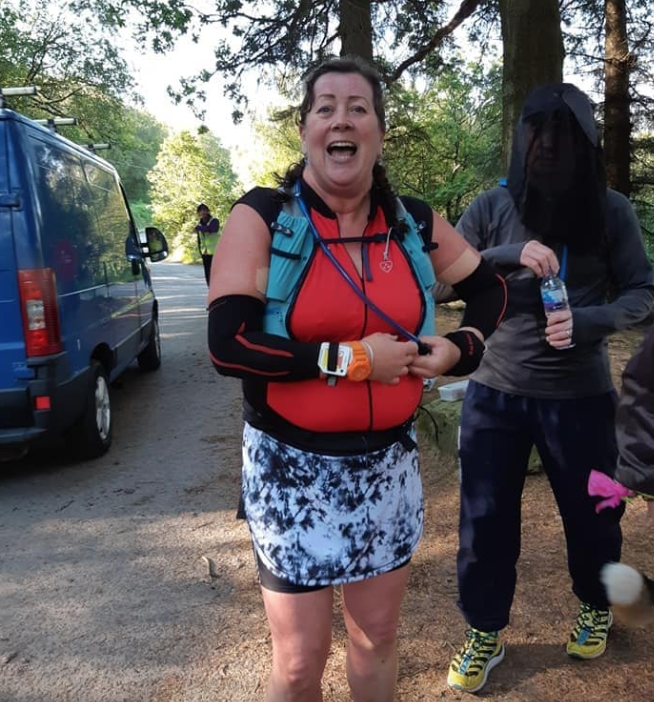 Then it started to get tough. 14 miles along the lochside was pretty brutal. It’s all very much rocky boulders and there is a fair bit of scrambling to do. Added to the fact that there was hardly anyone around so I had no one to encourage me at all.

I finally passed an American man who was really struggling and couldn’t wait for the terrain to improve. Once off that bit, I was sure I wasn’t going to make the cut off at Beinglas but I’d promised myself I wouldn’t quit between check points. Going up over the Angels Playground about finished me off as it was getting hot by then but finally I was heading downhill. The sweeper came out and I was sure he was going to tell me I was out. Nope. He was telling me I could still make it. Over the bridge, over the stile and a flat out sprint got me into the check point at 11 hours, 59 minutes and 42 seconds. A full 18 seconds to spare. No bother there then.

Then I realised I still had over 50 miles to go. Feck. Fekity fekkin feck.

Hey, now wasn’t the time to quit so after a little bit of gentle encouragement from the marshals (stop fannying about. Move it😂) off I went. Finally made it to Auchtertyre with a massive 12 minutes to spare. Worth noting that the winner was arriving in Fort William at the same time as I was reaching the half way point.

Things fair brightened up now as I was allowed to have my support crew with me after this point. Kirsty and Fiona were amazing and it occurred to me that I was possibly starting to have fun. So much so that we smartened up the pace a bit. Which meant that Callum popped into the shop at Tyndrum and by the time he got out we were through and he had missed us. 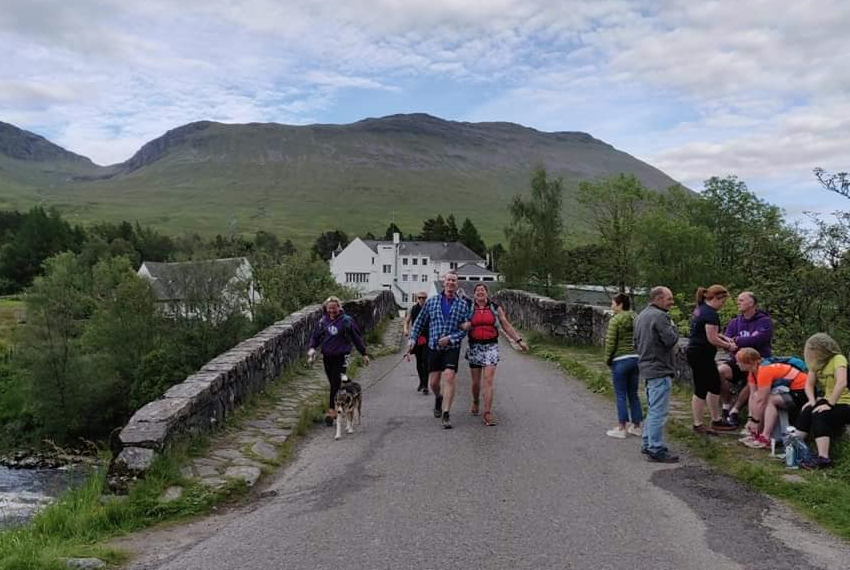 By Bridge of Orchy (60 miles in), it was Callums turn to support. Helpfully, every mile we passed encouraged him to share motivational thoughts. Along the lines of “I can’t believe my fat sister is doing this. This is just mental”. Thanks Cal. He was with me across Rannoch Moor and into Glencoe at the 71 mile mark. Although I was still doing okay for time, I was constantly clock watching and at Glencoe I got my longest break. 15 fekkin minutes. 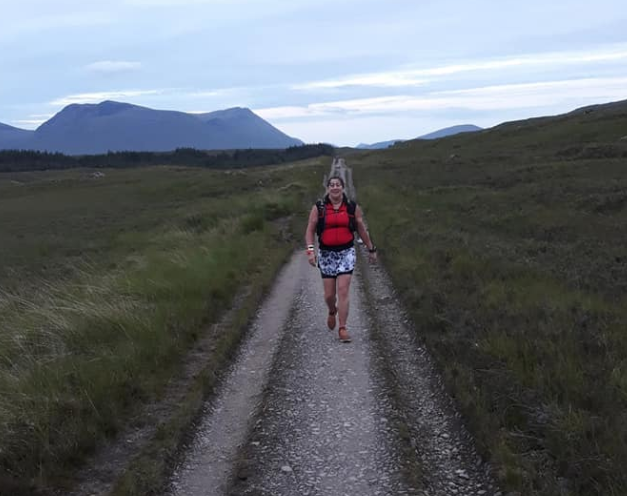 Then off again with Kirsty and Fiona. It was getting a bit scary now as it was pitch black and into my second night. I was a bit wobbly as we got to the bottom if the Devils staircase. Let’s just say it suits it’s name!! We did get a wee cheer up there by hearing the plight of the support runner who had got the dreaded chafe!! And who had no Vaseline!! So had tried a baby wipe – and who assured us that whoever makes baby wipes must hate babies. I generously shared some gel which got him to KLL where Patricia was apparently doing a roaring trade with her supersize tub of sudocrem and a strict “no double dipping” policy.

Arriving at Kinlochleven (81 miles) was a great feeling. By now I knew that I would finish although the coveted goblet was still not a guarantee. Off out again with Callum this time for the final push. Kirsty and Fiona went to Ft William and came back up the track and the last few miles flew past in a blur of happiness (okay, that bit’s shite but it makes for a better story than “fat old bird kept fekkin slogging along”). 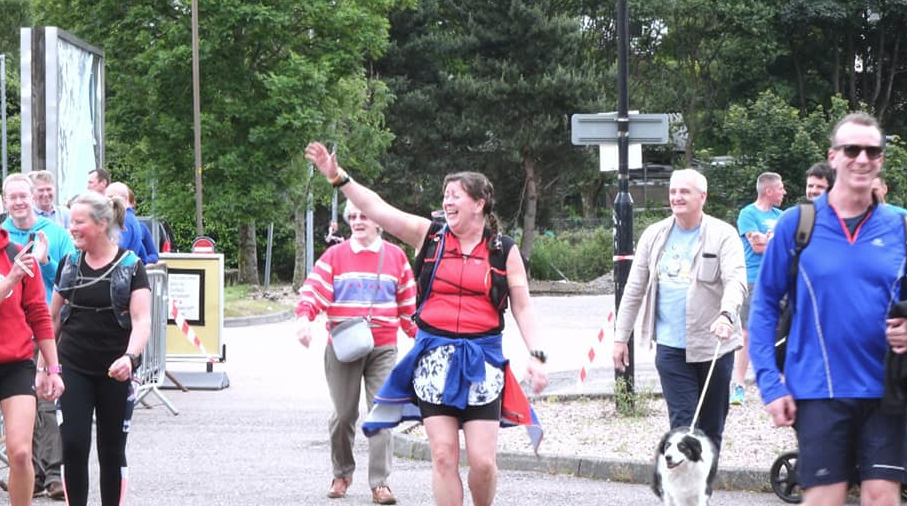 My crew were beyond awesome. I would never have made it if they hadn’t been so organised and enthusiastic. I cannot thank them enough and also everyone who messaged me and cheered me on. The girls read them out to me as we were going along and it made such a difference. I couldn’t actually speak to Grame  the whole way as I knew that would start me crying so poor Kirsty had to keep sending wee “I love yous” back and forward.

Looking at photos, it turns out I made John Kynaston cry when he gave me my goblet. (Yep, not the first and probably not the last time I’ll make a grown man weep) 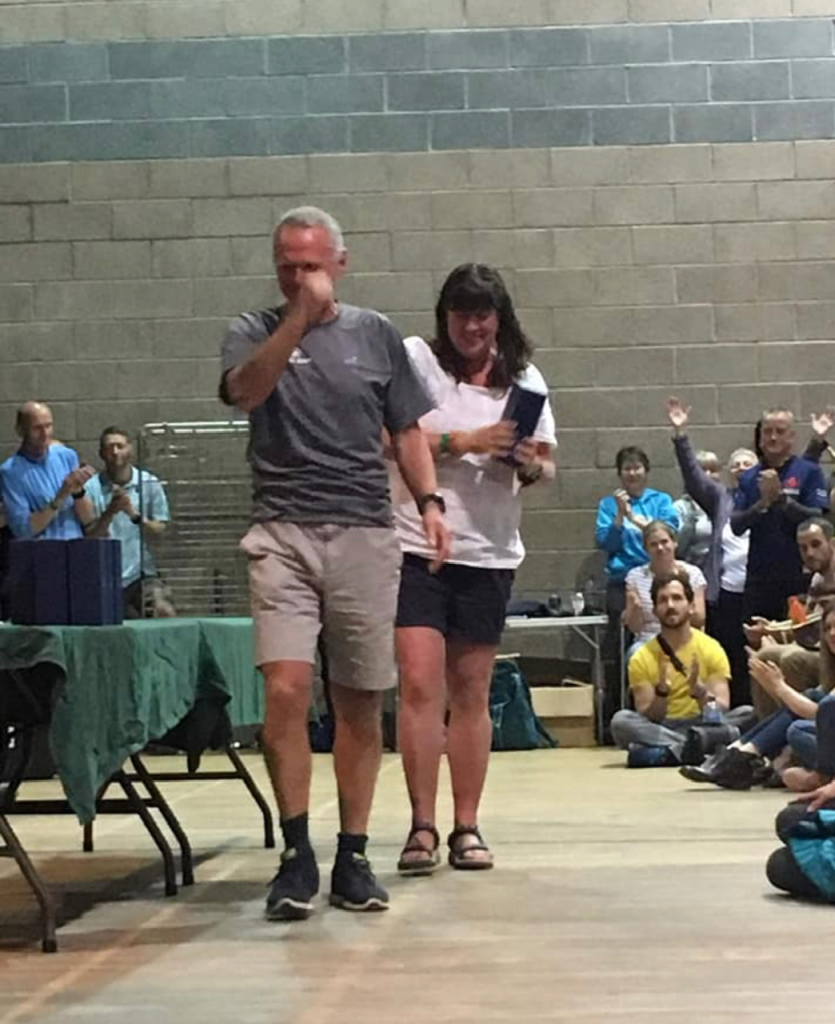 And my only crew fail is when I looked at my presentation pics and realised my bloody blouse was back to front.

I am now the proud owner of a West Highland Way Race goblet. Would I do it again? Not a fekkin chance. 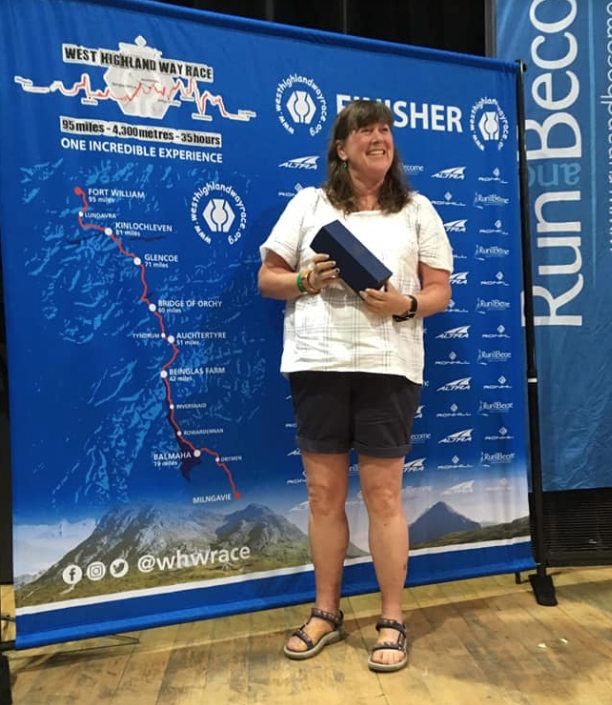